I'd like to take a moment to warn everyone that I will be bringing the Mustelidae Spotlight to an end within the next month or so. I am simply running out of musties to write about. There are still several that I wish to bring to the spotlight, so don't run away just yet!

This week, I want to bring you a very cute little fellow: the least weasel. I almost didn't see this guy as he is very tiny. The males range from 8 to 10 inches, and the females can only be as big as 4.5 to 8 inches. How very tiny! And I think that their minuscule size is really their most noticeable quality IF you actually are able to notice them.

Least weasels are natives of Eurasia, North America, and North Africa. They commonly have a brown coat with a white belly. They also have a white winter coat which is similar to the stoats. I think either looks pretty good on them. It's safe to say that the least weasel is cute. How could something so small be ferocious?

Well, in a way, he kind of is. As tiny as this mustie is in size, he is actually very good at killing. Yes, most of what he kills are mice and other rodents, but they also--very professionally--go after larger prey such as hares and medium sized birds. That is very unusual if you consider that a hare is one of the larger, bulkier class of rabbits. Pretty good for a itty bitty weasel who hops around wherever he goes. Yep, he really does that!

The least weasel has its place in fiction. In Ancient Macedon, if a women got a head ache after washing her face, she might assume that a least weasel had been using the water as a mirror beforehand; however, she would not dare mention the weasel's name for fear that he will become vindictive and destroy all her clothing! Goodness! In Greece, there was a similar story about a bride who's bitterness turned her into a least weasel who would go about destroying the clothing of other brides-to-be.

In a story by a Roman author called Pliny the Elder, a least weasel managed to destroy a basilisk (basically a large reptilian monster) by his odor alone. Even weirder, the Chippewa believed that a least weasel could slay a half-beast creature called a wendigo by scurrying up his anus! Lastly, in the English Civil War, least weasels were believed to be the familiar of witches.

I have actually read a novel that had a least weasel as a prominent main character. In the "Welkin Weasels" series by Garry Kilworth, there was a very tiny weasel named Miniver who was very cute and still a very capable and resourceful animal in the team. In the book, they commonly referred to her as a "finger weasel" which was likely a more adorable way to explain what she was.

So what about me? I find it very amusing that something so small can be so brave and capable. I can see how these little creatures can be a strong force of either good or evil. They have a way to get things done despite their size, and that is what makes them so much fun. Least weasels may be small, but they can still be taken seriously. And they have proven it!

Thank you for reading this blog! If you enjoyed it, you can comment below, or you can email me at tooie@tooiekangaroo.com. 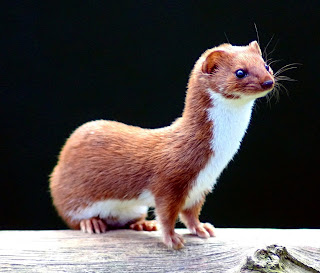 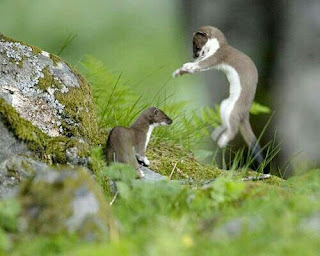 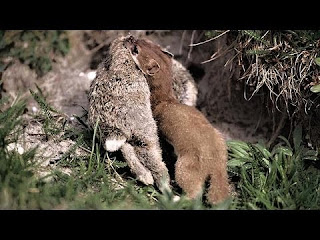 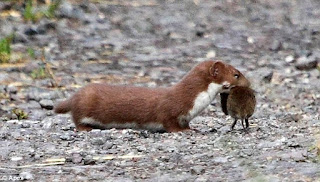 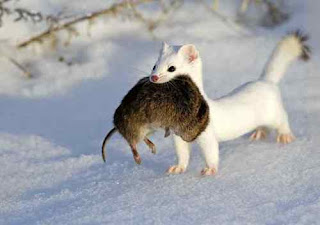 So, let's have a chinwag about the hog badger. First off, we shall go over what this fella looks like. Size-wise, he can be as long as 28 inches from head to tail. The tail can be as long as 6.7 inches. He has a long, narrow snout--sometimes giving him something of an aardvark look. They are a bit stocky, plus the nose tends to turn up in a rather porcine way. This is likely one of the reasons that they get the name "hog."

The hog badger can be found widespread in Central and Southeast Asia. They are struggling just a bit because of hunters who generally use dogs, but otherwise, they are doing well enough. Also, remember how the Fishers were omnivores? So are hog badgers! They eat just about anything which--once again--aligns then with piggies. They even use their snout and incisors to dig into the earth looking for anything eatable--even earthworms. So it should be pretty clear by now where they got their name from.

Research on the hog badger is slim. They don't show themselves very often, but what I do know is that they are rather indifferent to human beings. They tend to just ignore people or just walk away if they think things might go badly for them. Although, I do not know for absolute certain, it seems to me that these guys would be easy to domesticate as long as you could provide them with a constant source of food. They don't seem too interested in anything else.

Pigs are not musties, but hog badgers seems to fill their rolls fairly well on the world of mustelidae. In fiction, they likely would be the indifferent gluttons of society. They would spend much time spending their money on food and being rude to people who get in their way. Yes, I do see them as wealthy. I've made characters in my stories like that, and they have their own appeal.

Mustelidae is most often seen as something more nefarious in nature. Gluttony is one of the seven deadly sins, and it seems like the hog badger indulges in this sin quite frequently. As an animal, this mustie can demonstrate the problems we sometimes have as human beings--a creature that can overcome such urges.

Thank you for reading my blog! If you enjoyed it, you can comment below, or you can email me at tooie@tooiekangaroo.com! Oink! 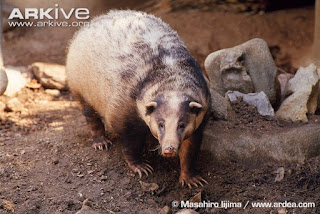 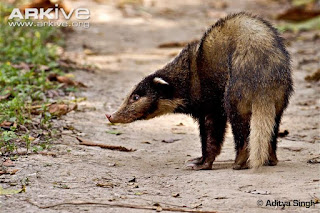 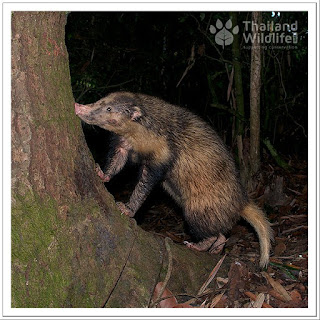 When I came across the Fisher in my research, I went back to my blogs to find out if I had written about them. I said to myself, "Surely, I could not have forgotten the fishers." The truth was that I had actually forgotten these fine specimens of mustelidae. Oops. I really felt bad about this, because I did actually know about them. I passed over them several times because I had thought I had done a blog for them already. Once again: oops.

The fisher is a slightly chubby mustie living mostly in Canada. They have a body length of 47 inches and weigh about 6 pounds. Because of their natural habitat, they end up in a lot of snowy areas. I found it interesting that their feet are disproportionately larger than their legs which helps them walk on the snow. It's a lot like having snowshoes if you think about it.

I personally think fishers are adorable. They look like they would make a fine, cuddly plush animal. Their fur is pretty thick, which makes me want to hug them; although, I do not recommend doing that if you spot one. They might take a hug as some sort of local insult and try to bite your face off.

So, I'll give you one guess on what fishers like to eat. What could it possibly be? What do you think a fisher might want to chow down on? That's right! Chickens and mushrooms! Fishers do not eat fish, but hold on a moment! Did I say mushrooms? What is a mustie doing eating mushrooms?! Although it is very rare, fishers are actually omnivores. They are mostly known for hunting hares and porcupines, but they also go for various plants to add to the meals. The chickens they kill are often stolen from farms and are not really their natural prey.

Fishers prefer to be on their own and only group up for mating purposes. If you run into one, he'll probably watch you carefully. This creature does not really like trouble. If you approach him, he will probably run away, but if you corner a fisher, he will go on the offensive. They are not social animals at all. There has been a number of attacks on curious children who were probably trying to hug the cute things. Some animals just want to be left alone.

The fisher has been mentioned in several works of fiction. Unfortunately, I have not read most of them. In a book entitled, "Winter of the Fisher" by Cameron Langford, a recluse living in the forest frees a fisher from a trap and forms a not so perfect bond with him. The fisher is an animal shaman in the story "The Blood Jaguar" and a porcupine hunter in "Ereth's Birthday." My only personal fictional encounter with the fisher was in the comic book series "Mouse Guard." They are very dangerous solitary hunters who wear the carcasses of their victims as clothing, armor, and jewelry.

Between you and me, I tend to lean towards the way "Mouse Guard" explains things. The books really do a good job with their mustie and rodent lore. I like the idea of them being solitary savages. They hunt and kill for themselves only and greatly dislike any social interactions. I really like that! Still, it is a shame that I am not allowed to hug them.

Thank you for reading my blog! If you enjoyed it, you can comment below, or you can email me at tooie@tooiekangaroo.com. Snarl! 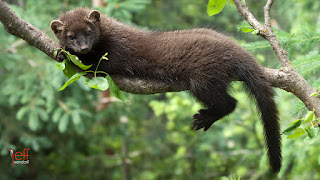 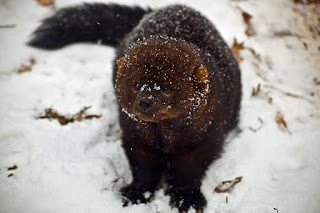 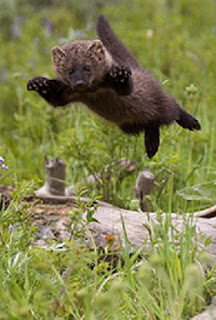 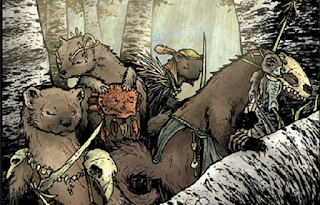 Here is a very small member of the polecat family. The marbled polecat is only 13 inches from head to tail. I haven't really been seeing a lot of tiny polecats in the recent weeks, so that makes this little guy special.

The marbled polecat is also a visual spectacle. He has a fairly wide array of different designs on his body. There are lines on his face, stripes on his tail... polka-dots. Yeah, he must have lost a bet or something, but I have to give him credit for really pimping himself out for the world to see. I don't think you'd have much trouble identifying him in a group of other polecats.

Marbled polecats are not so aggressive that they fire blindly. Don't worry, they'll keep the safety on for just enough time for you to run away. These musties put on a little display of warning to people or other animals that come their way. They raise up on their legs, arch their back, curl up their tail, and make all sorts of silly noises. These noises translate into, "I may be small, but I'm still dangerous!"

The marbled polecat likes to eat just about any kind of rodent or small bird he can get his paws on. Mustelidae is well-known for having a good set of teeth for tearing flesh, and they are wonderful hunters. Humans often employ the marbled polecat as "mousers" similar to cats. I do think, however, that a mustie with colors like the marbled polecat should be easier to see. But then again, they tend to favor desert areas, so it may work out for them after all. This species of polecat can be found in the drier areas and grasslands of southeastern Europe to western China.

Fiction-wise, let me just be blunt. This polecat is a pimp. I mean... if you just look at him in the pictures below. the guy really knows how to make an appearance. I imagine these guys do have a mean streak, but otherwise, they make up for any flaws by simply flaunting it! Hey, when you are that short, you might as well make the best of it.

Thank you for reading my blog! If you enjoyed it, you can comment below, or you can email me at tooie@tooiekangaroo.com. See ya next time! 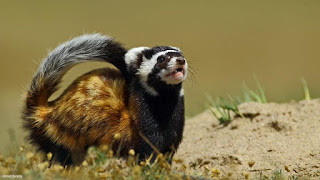 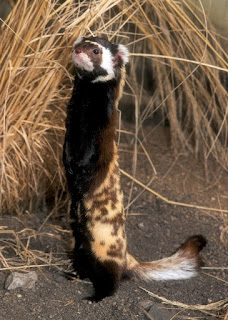 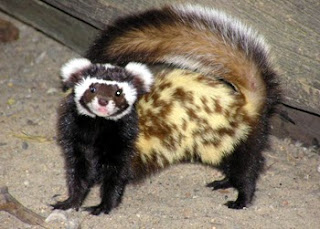