A St. Bernard is a very large dog that I have always adored from a distance. I have never actually seen one in person sadly. They are classified as working dogs because they not only are pets but also are put to work for the sake of humankind. Let's have a look at them.

As I said, they are very large. They stand at a whopping 35 inches tall. They can weigh as much as 260 pounds. They have long shaggy fur which is generally a mix of white and brown. Their tails are not only long but very heavy and covered in fur. It is so heavy, it generally just hangs. The St. Bernards are from the western Alps in Switzerland, Italy, and France.

This breed of dog has a number of uses such as herding, hunting, watchdog, but it is clearly more famous as a rescue dog. They are very good at finding people trapped in the snow after avalanches. A lot of fiction depicts them with barrels of brandy around their necks, but this is actually not practiced. The idea of it has been attributed to an 1820 painting by Edwin Landseer.

The St. Bernard is a gentle giant. They are extremely friendly with everyone including children. The only problem is that they can accidentally knock small children over and cause injuries. Training is needed to help them with this. If a St. Bernard ever gets violent, it is because it has for some reason become afraid.

In my research, I found mention to a legendary St. Bernard named Barry. He was a mountain rescue dog in Switzerland. Apparently, he found a boy inside of a cavern of ice, pressed against him to warm him up, and then persuaded the boy to get on his back so he could carry him to safety. This legend has since been disputed, but there are many who still believe in it. If it did happen, I think that is pretty darn cool!

In fiction, St. Bernards are everywhere. You saw them a lot in old cartoons with their brandy barrels around their necks. They usually pop up when someone had frozen solid and fill up their bellies with the brandy which not only saves the victim but also renders them completely smashed. There are other cartoons that show the St. Bernard getting drunk on his own brandy with whoever he is supposed to rescue. They end up singing drunken songs and the like.

In 1992, the movie "Beethoven" featured a St. Bernard. It was a fun movie about a family who owned a dog too big for his own good. A lot of the humor came from the troubles of trying to keep the large creature under control. The movie did well enough and spawned a whopping 7 sequels and 1 animated series.

I personally love the idea of a friendly but very large shaggy dog person. I would love if I was friends with one honestly. I'm not saying this because I want the brandy either. It's like how Han Solo had Chewy. I want a St. Bernard instead. I'll leave it at that.

Thank you for reading my blog. If you enjoyed it, you can comment below, or you can email me at tkwadeauthor@gmail.com. Woof. 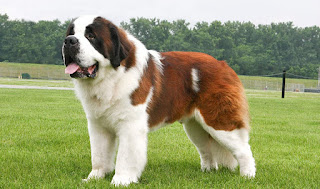 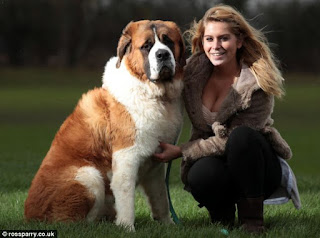 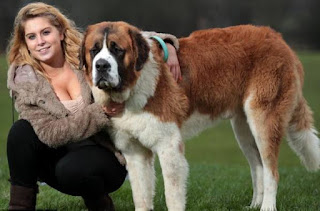 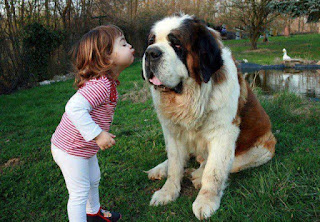 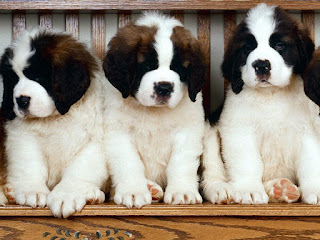 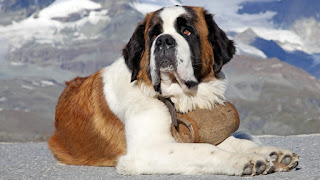 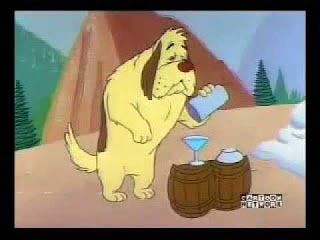 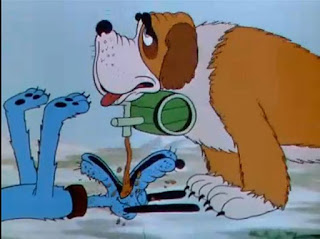 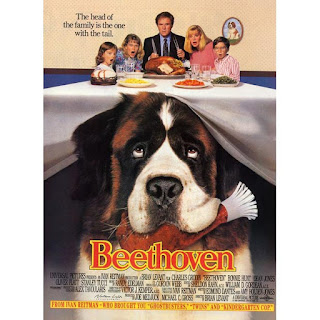 Oops! Looks like we still have another bat spotlight to do. Honestly, where would I be if I did not cover the famous vampire bat?! Let's give it a look-see.

In addition to the "sound sight" exhibited by most bats, the vampire bats have special thermoreceptors on their noses which help it locate sources of warm blood. This is similar to how snakes hunt and very important if blood is your thing. Where there is blood there is usually warmth.

Guess what! Vampire bats cannot stand light! You will very likely never see them in the daytime. They will find any nook and cranny they can to make their roost in complete darkness. This could be within the hollow of a tree, caves, wells, and even inside the attic of a church. However, if they are found in the daylight, they will not turn into dust. That's just silly.

One roost can be apart of a much broader colony that can amount to hundreds of roosting sites. The roost of a vampire bat is often called a harem. The females outnumber the males. There can be more than one males living there as long as it doesn't get too crowded. The time of year often decides how many males can live there. The females are shared between them, although each male will become pretty possessive abut the ones they pick.

The common vampire bat prefers mammal blood. However, the hairy-legged and white-winged variety go after birds. The common will go after a docile mammal--preferably one that is asleep. They will create a small incision with their teeth and then proceed to lap up the blood that comes out of the sometimes 8mm deep cut. They do not--as some people think--suck out the blood. Additionally, the vampire bat's saliva acts as an anticoagulant which proactively keeps the wound from clotting. A bat weighing 40 grams can consume up to one fluid ounce of blood. After hearing all this, I am sure you understand why they were given that name.

I am a bit staggered when I think about how much fiction has been written about these guys. The first one that comes to mind was Barnabas Collins from the old soap opera Dark Shadows. He was, on occasion, able to change himself into a vampire bat. It never really looked very good--I mean, it was literally a bad on a string--but it became one of the staples of hoaky vampire lore.

There was a vampire bat in the 2001 video game "Conker's Bad Fur Day." His name was Count Batlula and was a direct spoof of Dracula from the movie "Bram Stoker's Dracula." He did not just drink blood in that game, he guzzled it. In fact he guzzled so much blood that he got too heavy to fly anymore and ended up killing himself.

There are a lot more of these bats portrayed in fiction throughout the years. It is not hard to understand why. More often than not, they inspire us to consider the theme of vampirism itself. Imagine a human going about and doing the things this creature does naturally. It is another reason why we should be wary about becoming too animal. Humans should try to be greater than such things. And with that final statement, I bring this spotlight to an end.

Thank you for reading my blog! If you enjoyed it, you can comment below, or you can email me at tkwadeauthor@gmail.com. "I never drink... vine." 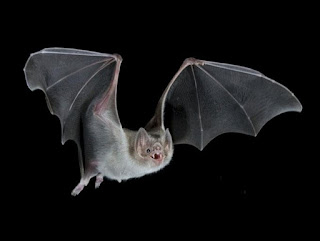 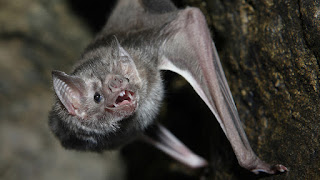 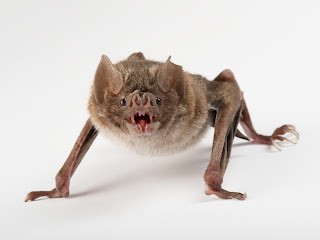 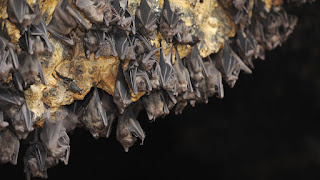 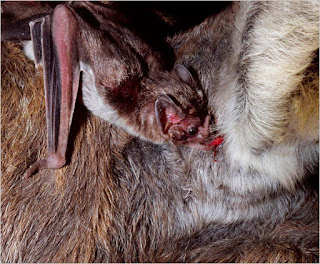 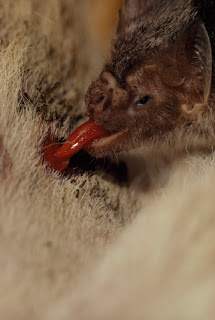 Good lord! How did I miss this little guy?! Yes, I haven't done a Marsupial Spotlight in a while. I had moved on to other animals. I ran into this fellow rather suddenly today and decided that I would be a fool to pass up the opportunity. Meet the quokka.

The quokka is a marsupial macropod which simply means it has a pouch like a kangaroo does. It is very small--about the side of a house cat. More specifically, the creature is up to 21 inches long with a 11.8 inch tail. This is amazingly short for a macropod. They are very stocky, and most people think they look like miniature kangaroos. They are mainly found on the islands off the coast of Western Australia but can also be seen on the mainland.

The quokkas are herbivores. They feed mainly on vegetation as well as grasses and leaves. A lot of tourists like to feed them; however, this is discouraged. Anything but their natural food tends to make them ill. I also want to mention that quokkas are very popular with humans, and I will get back to that in a moment.

When quoakkas breed, they always give birth to one baby called a joey. This will happen generally twice a year. The joey will live in its mother's pouch for 6 months. Once free of the pouch, it still relies on it's mother's milk for 2 more months. It can have its own babies at 1.5 years old.

The International Union for Conversation of Nature gives the quokka a rating of VU which means Vulnerable. The quokkas are unfortunately being hunted on the mainland by foxes, cats, and dogs. The ones on the islands, however, do not have this problem. They still have to deal with snakes, but it is not as bad as on the mainland.

Probably the most notable aspect of the quokka is how they have absolutely no fear of human beings. They will just let you walk up and pet them. A very popular thing to do for tourists is to take a selfie with a quokka and upload it to social media. The animal seems to smile and appear enthusiastic like it is making a new friend. It is very cute. Almost too cute.

I don't know of any quokkas in fiction, but I can see them as very outgoing individuals that want to make friends with everybody. The selfies really cinched it for me. I can see one coming up to me saying, "I couldn't help but see you were alone and I thought I might come over to give you some company." That is what a quokka is to me.

I made sure to find some quokka selfies for you. Check out the images and enjoy this very adorable marsupial from Australia.

Thank you for reading my blog. If you enjoyed it, you can comment below, or you can email me at tkwadeauthor@gmail.com. Snap! 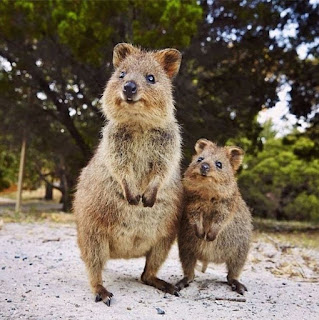 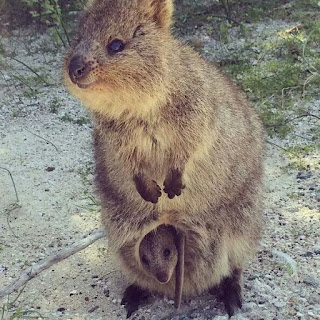 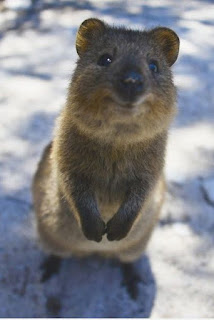 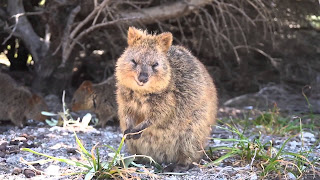 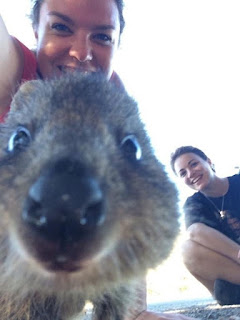 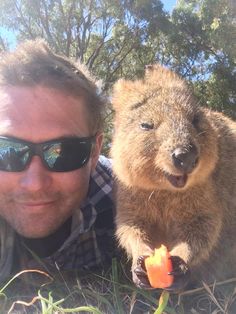 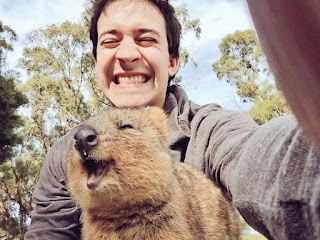 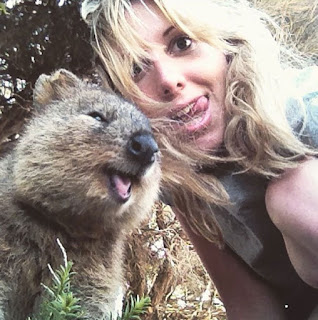 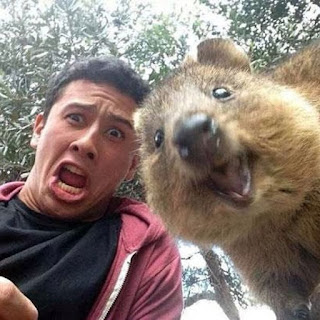 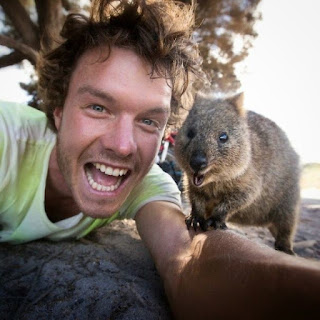 This particular bat is one of the smallest, measuring only 2 inches in length. They only weigh about 0.2 ounces. They have a very pronounced leaf-like orange nose with pointy orange ears. Aside from that, they are a bundle of white fur. The Honduran white bat can be found in Honduras (obviously), Nicaragua, Costa Rica, as well as in western Panama.

This creature is part of a line of bat species called tent-making bats. What this means is that they will find a large leaf and bite into it until it is bent over into an upside-down V shape. They will then form a roost on the underside of this make-shift tent. It helps protect them from the wind and rain. Additionally, they will keep extremely close together for warmth. The latter grouping makes them look like a bunch of stuck-together mashmallows.

The Honduran white bat eats mainly fruit and enjoys living around banana groves. Once mated, they give birth always in the spring. They only have one offspring at a time. I think it is a bit ironic that they feast on sweet things only to grow up to look like marshmallows. I apologize if I keep lingering on that point, but really, it's the only reason I like these guys.

I know of no fiction about these bats, but I do see them as cute, sweethearted little people who can't help but be cute. Bats are usually known for being creepy things, but what's creepy about a big family of furry, white puffballs? As characters, they would go around in large groups testing out all the deserts from various restaurant menus. I really should bring this spotlight to an end before I lose my mind.

Just look at the pictures. You'll see what I mean!

Thank you for reading this adorable bat blog! If you enjoyed it, you can comment below, or you can email me at tkwadeauthor@gmail.com. Kree! 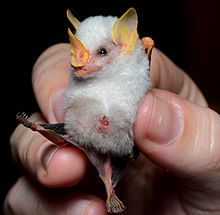 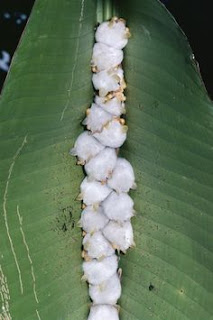 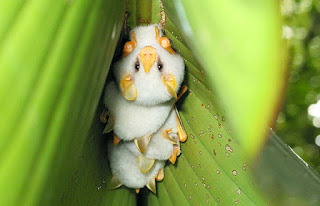 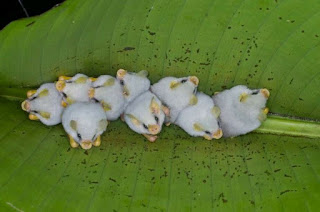 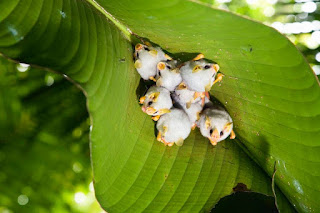