In the last spotlight, I mentioned I was going to look into doing more spotlights for bats. I thought it might be fun to look up a really big one. The large flying fox is just such a bat. In fact it is part of a group of species called megabats.

The large flying fox has a body length of 13 inches. When it has its wings open all the way, they span as wide as 11 inches. It does not posses a tail at all. As the name suggests, the creature does have a very fox-like face, even down to the pointy ears. It can be found in a number of places ranging from the Malay Peninsula to the Philippines in the east. They are also in the Indonesian Archipelago of Sumatra, Java, Borneo, and Timor in the south. They prefers coastal regions but they can also be spotted as high up as 4,500 feet.

Unlike the silver-haired bat, the large flying fox is entirely an herbivore. They feed on flowers, nectar, and fruit. It's a bit hard to believe being they are so very large, but it is true. I also found out they really love durian fruit which has a horrible smell. I guess they put up with it because they are actually very sweet.

The large flying foxes form into groups when they go out to feed. They will sometimes fly as far as 31 miles in one night for their food. When they find a tree that they like, the bat will land on the tip of a branch standing upright before allowing itself to flop upside down while still holding on. Apparently their eating habits are very sloppy and make a lot of noise.

Mating periods differ depending on their location. They only give birth to one young at a time. During the weaning period, the mother will carry the offspring around and leave them at the roost to bring back food. The child is fully weened in 2 to 3 months.

There may actually be some fiction about the large flying fox, but I am not aware of it yet. I personally would like to see them going around playing pranks on people--pretending to be vampires and whatnot. The funny thing about it is they are 100% harmless. They just enjoy a good scare now and again. Who wouldn't be scared of them? They're giant bats!

Anyways, that's it for one of the biggest bats in the world. Maybe, I'll find more bats that are fun and interesting. Come back next week and find out!

Thanks for reading my blog. If you enjoyed it, you can comment below, or you can email me at tkwadeauthor@gmail.com. Screee! 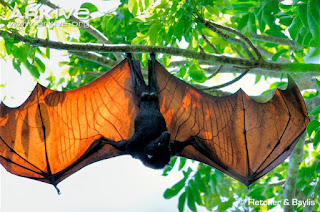 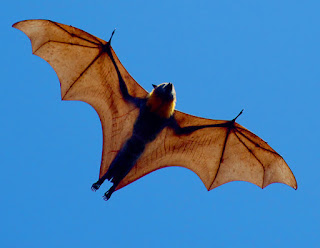 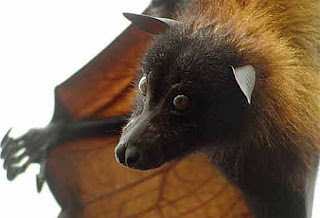 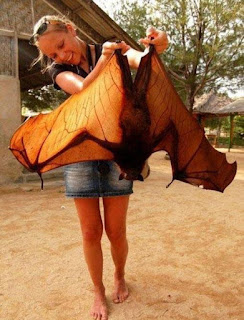 I was surprised to discover that I never did a spotlight for bats. I actually really like them, so it is about time I do something about it. The silver-haired bat is a species of vesper bat that can be found nearly in every single place in the USA as well in some of the southern provinces of Canada. Sizewise: this bat can have a length of nearly 4 inches. they have a tail length of 1.5 inches.

The silver-haired bat lives mainly in trees in large groups. This is called their roost. They keep close together for warmth and make a lot of noise at each other. I've heard that most of these noises are them complaining to each other about food shortages or overcrowding. I am not sure if the latter is true, but if it is, it really does add a lot of character to them.

As far as food, these bats will fly about tracking various flying insects--such as moths--with a process called echo location. This basically means that they cry out and listen to where the sound bounces off of which gives them a picture of where the insect is. This ability is important since this creature is nocturnal. Once the bat gets a good lock on the insect, it will swoop down and gobble it up mid-fight. It can do this for hours at a time before it is satisfied.

As far as reproduction, silver-haired bats will actually copulate mid-flight. They will then find a secluded place--such as a cave--and hibernate during the 50 to 60 day gestation period. The couple will give birth two 2 offspring and it is nearly always a male and a female. The mother will wrap their children up in their wings for warmth, and I think that is very cute.

In fiction, the most notable silver-haired bat would be from the book "Silverwing" by Kenneth Oppal. Although this book featured quite a large number of bat species, the main character Shade was a silver-haired bat. He was also a runt that had a major task ahead of him which required much bravery. This book was later made into a TV series. It lasted one season with 13 episodes total. I am currently reading the book, and it is very good.

These particular bats are some of the most common around the country. I do see them as contrary to themselves in that they love being together in large groups, yet they do seem to complain about all the crowding in the area. Sounds to me like a bickering family that loves each other despite the frustrations of always being together. That's how I see them as characters.

I'll see if I can find some other bats to spotlight. Until then, have a look at these pictures!

Thanks for reading my blog! If you enjoyed it, you can comment below, or you can email me at tkwadeauthor@gmail.com. Screech! 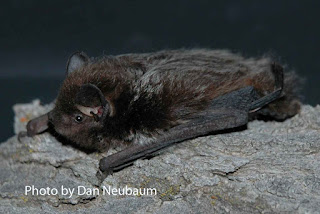 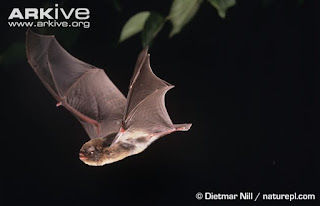 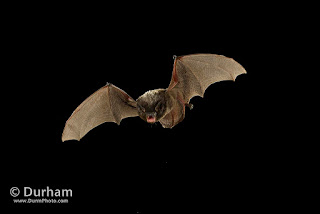 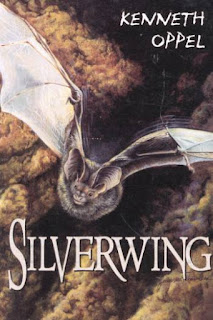 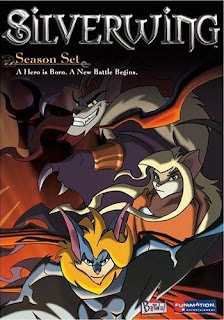 Most everyone knows what a crab is. We usually see a little shelled creature with spindly legs that walks sideways. A crab is a crab when it comes down to it, but what makes the Japanese spider crab so amazing shall become apparent very soon.

The gimmick of these fellows are found within its description. The main body of the Japanese spider crab--shell and all--can grow as large as 16 inches in width. That is pretty big for a crab, but watch out! The legs of this creature can grow as long as 18 feet. That makes this crab the largest in the world.

This crab can be found off the southern coast of the Japanese island Honshū. They can often be found in depths as low as almost 2000 feet. They enjoy inhabiting vents or holes deep below the water's surface.

The long legs are used by the females to carry their larvae. The larvae develop in these pouches for up to 72 days at which point they will develop into something much more like a crab; however, they tend not to look anything like the parent until much later. Additionally, the Japanese spider crab is an omnivore and will feed on whatever plant and animal matter they can get a hold of.

So the main thing about this crab is how large and spooky it looks. I did not really go into this with a fictional character in mind. I was thinking more like alien invasion. Can you imagine a swarm of these creatures crawling towards you? There is something intensely alien about them. They remind me of odd things I have seen in movies and games--such as the alien ships in War of the Worlds and the striders from Half-Life 2. It is very possible that this creature has inspired such fiction. I beg you to consider the possibility.

For now, you should have a look at these marvelous picture. The ones with humans in them are best because it provides a size comparison. How creepy they are! I love it!

Thank you for reading my blog! If you enjoyed it, you can comment below, or you can email me at tkwadeauthor@gmail.com. Thank you! 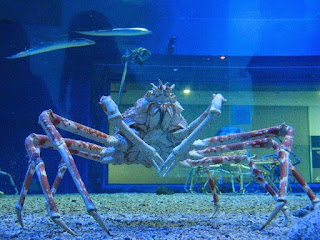 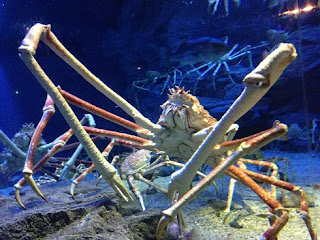 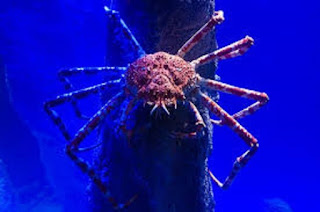 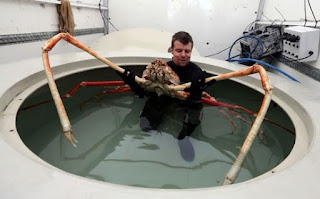 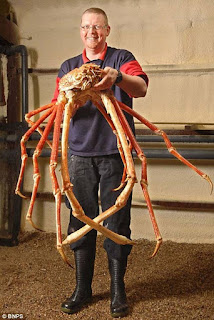 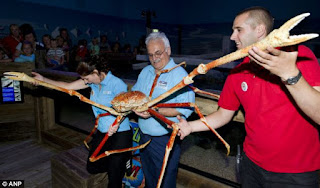 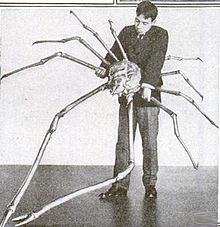 I'll get straight to the point with this one. The Canadian lynx has really large paws. Although this is a trait for most lynxes, this was the one I found first. I'm pretty much playing first-come-first-serve here. Let's have a look at these pretty cats and their paws.

The Canadian lynx is a big cat. They measure as much as 39 inches from head to tail and can stand as high as 22 inches tall. They have extremely short tails. The heaviest they can get is about 40 pounds. The coat is generally yellowish brown but can sometimes be grey. They have black fur shooting up from their tips of their ears which is an iconic symbol for these animals. I am personally fond of their extremely large paws on both the front and back. Even as kittens, those paws are quite large. As would be expected, this animal can be found all over Canada; however, they are often spotted in some northern states of the US.

This animal really loves to eat a particular kind of hare called the snowshoe hare. If these animals are in the area, they are pretty much all the Canadian lynx is going to hunt for. This creature is known for going as far as 5 miles a day for its food; however, if it cannot find any of the type of hare that it wants, the Canadian lynx will settle for other animals such as ducks, grouse, moles, red squirrels, voles, and young deer.

Mating is particularly interesting with the Canadian lynx. The female is only able to mate for a few days somewhere between March and May. She broadcasts that she is ready by urinating. When a male find her, he understands time is of the essence. For this reason, he will breed with the female over and over again until the job is done. In most cases, the two will mate for six times in one hour. Gestation is 64 days and the litter ranges from one to four kittens; however, if they are in an area where prey is abundant, the female can give birth to many more.

The Canadian lynx's paws, as I have mentioned, are super big. The reason for this is due to them being broadened by wide-spaced metatarsals. They can spread as wide as 4 inches. This allows them to move very quickly and easily through the snow. For me, I just enjoy looking at them. They are very lovely-looking paws.

In fiction, I see the lynx being a very large and friendly beast. He is more than comfortable shaking hands with people. After all, he has the hands to do it with. At dinner he is probably a picky eater but can bend if the company so wishes him to. Sex life happens in short bursts. He'll literally go a whole year in a platonic relationship when suddenly a three day sex party happens at his house between him and his girlfriend. Everyone wonders why he comes to work the next day with his shirt on backwards. Of course, his response would be something like, "I'll tell you when your older, kid."

Have a look at these creatures! I'm pretty sure your cat doesn't have paws these big. Even without the paws, they are beautiful to look at.

Thank you for reading my blog. If you enjoyed it, you can comment below, or you can email me at tkwadeauthor@gmail.com. Meow! 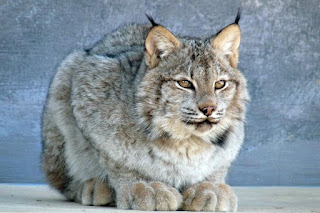 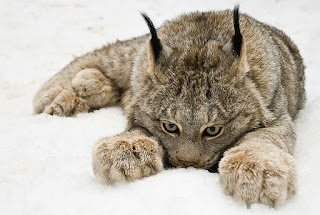 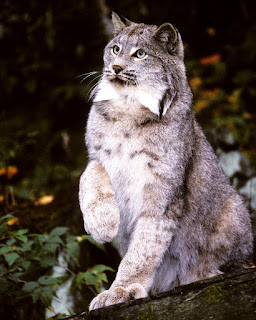 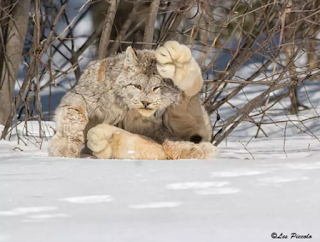 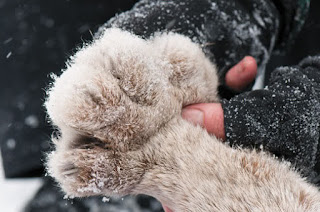