Shadow Man is a video game that came out on Nintendo 64 and Playstation 1 back in 1999. It may actually be the very first horror themed game I ever played, and I played it quite a lot on my old Nintendo 64. They recently came out with a supreme version of this title in 2021 called Shadow Man: Remastered, and it is one of the best games I have ever played, improving on just about every aspect of the original masterpiece.
Shadow Man is actually an obscure super hero from Valiant Comics and later Acclaim Comics who actually has a fascinating history. The actual Shadow Man has actually been a number of people. They merely need to have the mask of shadows knitted into their ribs by a voodoo priestess, and it gives them a number of great powers such as strength, agility, depleted fear, and a gun that can steal souls. They can also travel back and forth from our world into the land of the dead known as Deadside. It's some pretty awesome stuff. In the case of the game, the present Shadow Man is one Michael LeRoi.
The game is a horror masterpiece that employs gloomy visuals, a constant sense of dread, and a disturbing musical score that rivals most of Silent Hill's tracks. The latter aspect is seriously the best part of the overall experience. It drives the atmosphere of the game much farther than it would with its already excellent sound effects library. The people who put this game together back in '99 were masters of the craft, and this remaster only makes everything better.
Everything is better now. All the blurry and pixelated textures are now crisp and beautiful. The squarish polygons are still the same, but somehow they don't bother me. If anything they make everything all the more disturbing. The game's story and progression is slow and sometimes maddening, yet the game was only about 19 hours in length. The intention was to make you feel lost, yet you always seemed to know what needed to be done.
The plot itself is very good. Legion, the one-yet-many demon, comes to five very evil men, contracting them to assist in his efforts to create an apocalyptical event that will open a doorway for the forces of evil to cross over into the land of the living. Each one of these men had a particular talent that could be used. Jack the Ripper, being one of the five, was an architect, and so he created the blueprints for a Cathedral to Pain as well as other horrible things that would be used to enact the rite.
Another surprising thing about the Shadow Man himself is that he is also a poet. Generally when he crosses over into new areas of the game, he will recite these dark, yet beautiful, poems that always satisfied without fail. I say this as a person who generally finds poetry uninteresting, but damn! This stuff is amazing!
There are literally too many things to cover in this game, but I will, for a friend, mention the Sisters of Blood. They are a rather bountiful group of witches that guard three areas of the game where you gain special powers that allow you to deal with heat and fire. The witches come at you in such great quantities that the fights with them are as exciting as they are a bit overwhelming. They come in these fantastic waves that have you gunning them down for sometimes up to hours. It's not bad, really. They always act as a serious trial that must be circumvented in order to gain your new power. Very well implemented enemy type.
To summarize, Shadow Man: Remastered is a solid re-do of an already great game. It implements two new areas that were canceled from the original release. It perfects the janky controls of the original, giving it more modern third person controls. The game is an amazing game when it comes to exploration. You WILL enjoy exploring Deadside and all of its horrors. Play the game. It's seriously a wonderful creation!
Thank you for reading my blog! Did you enjoy it? Either way, you can comment below, or you can email me at tkwadeauthor@gmail.com. You can also visit my website at www.tkwade.com. Check out my books! Thanks! 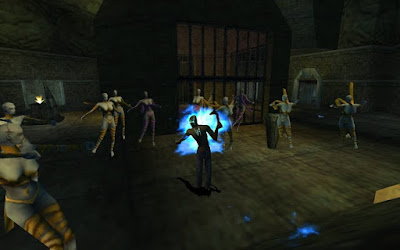